...with two hours of live entertainment

âCome join me and my noble court in the fulsome medieval feast in my banqueting hall amidst the light of flickering torches.
This is a medieval pageant that you can be part of ~ when King Henry and his dancing wenches invite you to join in the festivities. Whether youâre in a large group or not, expect a touch of magic, a swordfight, some great escapes and an astounding exhibition of strength.

This regal banquet takes place in the vaulted cellars of the Ivory House, St Katherineâs Dock. During your meal enjoy the entertainment as the main Royal Court show begins. Feel the excitement as His Majesty welcomes you and introduces a host of colourful characters from Englandâs past. From dancing wenches to court jesters to the incredible strongman, the amazing array of entertainers provides a breathtaking and magical display.

MENU
Finest Scottish salmon marinated in tropical spices, baked, then served on a bed of wild leaves and herbs topped with pineapple and papaya salad and served with a pink peppercorn and chervil mayonnaise
**
Roast pumpkin and red apple soup finished with clover honey and cloves with a splash of cream.
**
Braised English chicken in a rich brandy and Seville orange sauce, with a hint of tarragon served with a selection of market vegetables tossed in butter and baby roast potatoes...
**
A traditional Yuletide tart served with a drambuie and calvados cream. 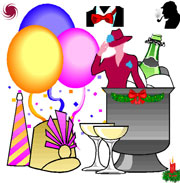